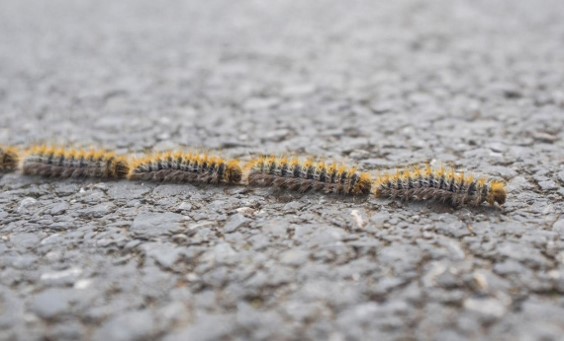 Many people die with their music still in them. Why is this so? Too often it is because they are always getting ready to live. Before they know it, time runs out. – Oliver Wendell Holmes, Sr.

I don’t know about you, but I do not want to be a processionary caterpillar. I do’t want to live an average life. I don’t want to just blindly follow those in front of me, hoping they will lead me to the right place.

One of my favorite song writers, Kerry Livgren, wrote in his book Seeds of Change that the people who are different are the ones who get noticed. So, when he started his band, he chose to be different. That band, Kansas, became wildly poplular. You may have heard of them.

My question to you is one I’ve asked myself. Do you want to live an average life like everyone else? If your answer is, “that’s fine with me,” then keep doing what everyone else is doing. If you want something different, something more, then you have to be willing to be different.

Or as Thomas Jefferson (you may have heard of him, too) once said,

When I was in Nursing School, we were told that as an RN, we could go work for anyone we wanted. We could get a job just about anywhere in the US. And I did that for about nine years. But I wanted something different; something more. So I started my own nursing business, and within 10 years, I had brought on six more nurses to handle the load, and was doing close to a million dollars in business yearly.

After owning this business for 20 years, I wanted something different, again. I wanted to move from success to significance. So, in 2018 I sold my nursing business and started CO-Inspire to teach others how to live an extraordinary life; to help them breathe new life into their company and people.

Has this venture been easy? Not at all. Has it been a rousing success? Not yet. In fact, if you read one of my previous posts (In The Midst of Failure), this has been one of the most difficult times I’ve ever had in my life.

However, study after study has shown that folks in their retirement years consistently have said that if they had the chance to live their life again, they would take more risks; they would make more mistakes. I do not want to get to the end of my life wondering what would have happened if… (By the way, if you are in your retirement years and you want to be different, I can help you. You can make a difference in others).

What I desire the most in my life right now is that I might leave a legacy for my kids, and as many other people that I can. Not a whole lot of money, necessarily, but I want others to gain some of the wisdom I’ve gained from others, and from my life experience.

I want to help guide those who want to step out of the line of processionary caterpillars and become leaders in their family, business, or organization. If you are ready to learn, I am ready to help. Drop me an email at steven@co-inspire.biz, and I will be happy to set up a free call. Let’s talk. Who knows, maybe you are on your way to extraordinary too.