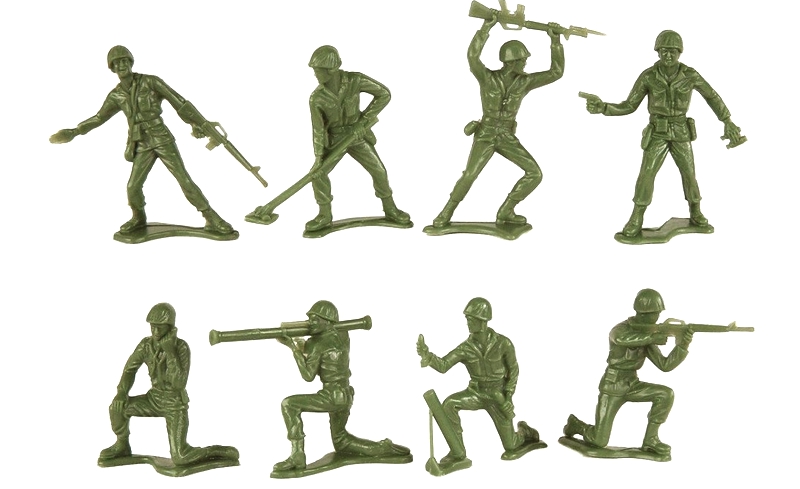 Ahh. The old green army men. These bring back many memories. We had a large coffee can full of these guys. And many were the times my brother and I would divide them, set them up and play war.

We used rubberbands to shoot them down, and whoever shot all of the other’s down won that round. We played for countless hours, and got really accurate with rubberband shooting.

I remember being curious about how there could be so many of the same men. We had close to a hundred of these guys, but only about 8 or 9 different figures. I had no concept of plastic molds and how these were made by the millions by pouring plastic in preshaped dies.

This morning, I was reading a book called Living Among Lions: How to Thrive Like Daniel in Today’s Babylon by David and Jason Benham. Even though the copyright was 2016, it was surprisingly current. The chapter I read concerned not being conformed to the world, but being transformed by the renewing of your mind.

Many people today, including Christians, live with a passivity that allows conformity. You see, the world wants you to be like everyone else. And the “everyone else” they want you to be like is determined by the world system. The culture is trying to force you into a mold, just like the plastic soldiers that come from preshaped dies.

So much of the media, education, and politics have this preset shape they want you to conform to. The plan is to tell you what to think and therefore how to act. And they want obedience without question. When people do ask questions, or don’t do what they say, coercion, manipulation, and other tactics are employed. And if this doesn’t work, there is shaming, public humiliation, and eventually threats of forced submission.

We need to take a lesson from Daniel and his three friends in the Book of Daniel in the Bible. Babylon tried to conform them too; first by changing their names, then trying to make them eat the defiling food, and teaching them to know and love the culture of Babylon. However, these four knew who they were. They were part of the Children of Isreal, and therefore the people of God. And His orders to live among them, but to not be conformed by them. They were to continue to observe all that God commanded.

By living among and mixing in, this would look much like, oh, maybe chocolate chip cookies. They were to be the chocoloate chips and not part of the batter; present, but distinguishable and different. Making the place better, but still being very different. These young men showed respect to their captors, but when it came down to violating God’s directives, they did not conform. By doing so, they ultimately transformed the culture.

God has told us in His Word that we are to not neglect the gathering together of the saints. That we are to lay hands on the sick. That we are to greet each other with a holy kiss, which would imply physical touch. We are to sing hymns, psalms, and spiritual songs. We are to observe the ordinaces of Communion and Baptism. That we are to be in fellowship with each other. All of this can only be done when we meet together physically, not virtually.

No exceptions were ever given to these commands. But the world wants us to not follow what God says, they want us to conform, no questions asked. So, will you conform, or live the transformed life God has called us to? If the latter, we will need to actively choose to do the things God says to do and leave the results up to Him. This requires thought and asking some questions.

Stop and ask why the world system wants us to stop meeting, singing, speaking the truth. Why are they so adamant about forcing us into their mold? Why are they using shame, humiliation, and threatening force to make us do what they want us to do?

Being transformed requires the renewing of your mind. We need to change our thinking. We need to immerse ourselves in God’s Word, in God’s Ways, and in God’s Truth. Then and only then will we be prepared to, like Daniel, transform the culture.