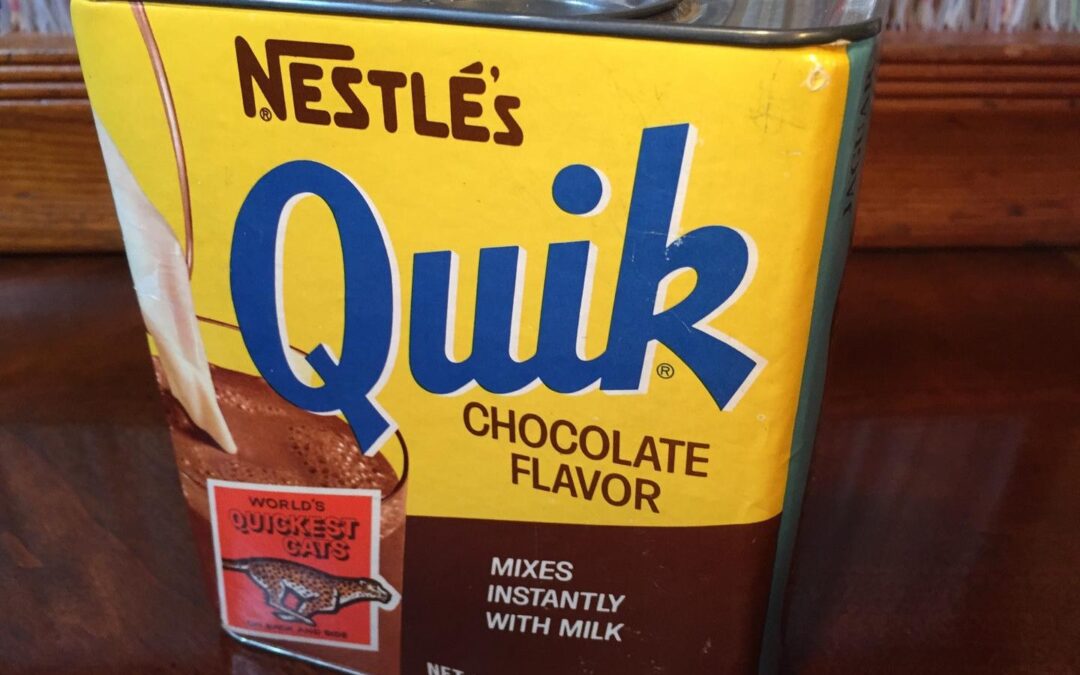 This may shock some of the people (well, outside of my family) who know me, but…uhh…I can get mad sometimes. It isn’t like what I used to be when I was a kid. I had a very short fuse growing up.

One of the stories that usually comes up when our family gets together is the time I got really mad at my mom. I don’t remember what she did to warrant my wrath, but I still remember grabbing a Nestle’s Quik Chocolate Milk mix canister (one like in the picture) and threatening to launch it at her. At the time I was around 7 years old.

My siblings remember the picture well. Me standing there, arm cocked back, object in hand, and mom standing there shaking her finger at me saying, “Don’t you throw that at me!” Well, I did not like her ordering me around, so…yes, I threw the canister at her. She dodged the projectile which then hit the wall. The metal lid popped off and, “poof.” A cloud of chocolate power filled the air and settled on the floor, the cabinets, and my mom.

My memory gets a little shaky at this point, but my siblings report there was due punishment immediately following the incident. And then more after my dad got home. This was followed by the “mother’s generational jinx” also known as the “I hope you have a kid just like you someday” curse. God gave me more than one of these kids, seemingly to make up for all the stuff I put my parents through.

I just read a news story this morning of a young man who was working in a donut shop. An elderly man came in and didn’t care for the service he got and insulted the young man. The young man dared him to say it again to which the older man obliged. The young man then punched the older man who fell and hit his head on the floor. He died 2 days later. This reaction will affect this young man the rest of his life.

Responding operates from thought. It considers the situation, the various actions that can be taken, as well as the possible outcomes of the actions, before proceeding. Oh, how the incident above may have turned out differently had the young man responded with reason. Is punching a customer for an insult, no matter how bad the insult is, ever the right response? Is throwing a box of chocolate mix at your mother ever the right response?

The answer to both questions is a resounding NO!!!!! What has happened to our culture and society? We have stopped responding and have resorted to reacting. The way to turn this around is for each of us to take responsibility for our thoughts, emotions, and ultimately, our actions.

What about you? Do you tend to react or respond?